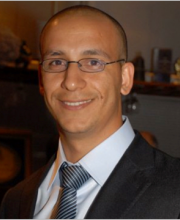 Research Focus:
Our research group is interested in topics ranging from total chemical synthesis of proteins, the development of chemoselective reactions applied to peptide and protein chemistry, therapeutic peptides and proteins, protein posttranslational modifications as well as protein functions.

We use either recombinant expression technologies or chemical protein synthesis and semi-synthesis to prepare our proteins of interest. Chemical protein synthesis (CPS) allows us to substitute any position in the protein sequence with functionalities that are not constrained to the 20 standard encoded amino acids. Furthermore, it allows the preparation of proteins with specific posttranslational modifications (PTMs) in homogenous forms and excellent yields to help understand the effect of each PTM on the proteins function and structure.

Chemical protein synthesis, a subfield of chemical biology, has matured in the last 30 years on the basis of two major innovations in this field: the solid-phase peptide synthesis (SPPS) pioneered by Bruce Merrifield, and chemical ligation reactions developed by Stephen Kent, most notably the native chemical ligation (NCL) (Figure 1a and b, respectively).We extensively use these two techniques in our research group.

Figure 1. The two major methods used in our laboratory; a. solid-phase peptide synthesis (SPPS) and b. native chemical ligation (NCL) in order to chemically synthesize small to medium size proteins (up to ~100-200 amino acids).

One target in our group is to understand the role of selenocysteine (Sec) in selenoproteins. The 21st encoded amino acid Sec is typically found in the active site of selenoproteins. Of the thousands of proteins in the human body, only 25 proteins are selenoproteins. Yet, only few members are well studied. Most selenoproteins are redox selenoenzymes (they catalyze oxidation-reduction reactions). Since sulfur and selenium belong to the same group of elements, they share many properties including electronegativity, atom size, and major oxidation states. However, they also differ in some properties, for example seleno-compounds are easier to oxidize than sulfur containing compounds, and the selenol group has a much lower pKa than thiol (5.2 for the seleno group in Sec compared to 8.3 for the thiol group in Cys). 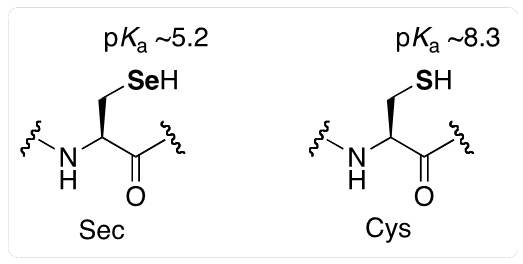 One major obstacle in studying selenoproteins is the challenge in preparing sufficient amounts of these proteins, especially by recombinant DNA technologies. Chemical protein synthesis allows substituting any atom in a protein sequence, with functionalities that are not restricted to the 20 standard amino acids.

We will study human selenoproteins, in order to shed more light into the importance of selenium in human health and disease.

Furthermore, we will continue to explore the effect of Sec in protein synthesis, modifications, protein folding studies, and more.