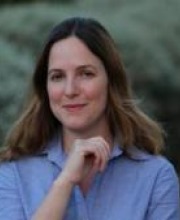 Understanding how proteins adsorb to inorganic surfaces is important in many biotechnological applications, including the design of medical implants, fabrication of antibacterial surfaces and biomeneralization. Many studies have been carried out in order to examine how proteins interact with inorganic entities or surfaces; still, it is not clear how proteins “sense” the inorganic surface. The research in the lab focuses on the fundamental rules that govern protein adsorption using single molecule force spectroscopy by AFM. Using this system we study the interactions between protein, peptides and amino acids and inorganic surfaces.

The schematic, on the right, represents an AFM tip decorated with a molecule. The plot, on the left, represents a typical histogram for a single molecule force spectroscopy experiment.

Nature exploits simple building blocks to generate complex architectures through the process of self-assembly. Understanding this process is essential for areas ranging from drug discovery to materials science. Peptides, specifically, can be used as a simple system for the study of molecular self-assembly, and hold a great promise in the area of nanotechnology as they are biocompatible, versatile, and can be easily decorated with biological and chemical entities. To mimic nature and form complex architectures by self-assembly, the lab explores new strategies for the discovery of novel peptide-based nanostructures and their organization on surfaces. The figure comprises scanning electron microscope micrographs of novel self-assembled structures discovered by the lab. 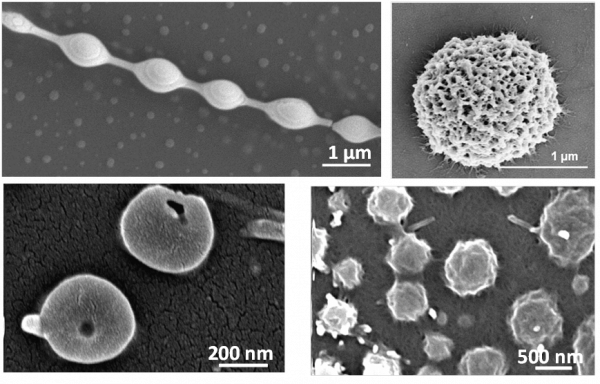 Biofouling is a process in which organisms and their by-products encrust a surface. The process starts with the non-specific adsorption of proteins to the surface, and continues with the attachment of the organisms to the proteins on a substrate.

On marine devices, biofouling of marine organisms can alter fluid flow rates leading to a significant increase in cost of marine transportation. The estimated cost associated with marine biofouling is 150 billion USD per year. Furthermore, biofouling accelerates mechanical degradation of materials comprising pipes, seals, and nuclear waste vessels ultimately compromising water quality. The colonization of ship hulls has been linked to two major environmental pollutions which are emission of gases into the atmosphere and the introduction of invasive species to marine habitats.

Antifouling materials prevent an organism from attaching to a surface. The challenges in designing such materials are in the ability to synthesize a material that prevents the attachment of the organism to the surface, performing in an authentic environment, and meanwhile does not have an effect on its surrounding environment by releasing toxic molecules. The inspiration is, therefore, to create green and non-toxic antifouling solutions.

My lab develops and tests biocompatible and environmentally-friendly materials that resist biofouling. The materials are based on short peptides that can self-assemble into a film for coating a desired surface. The advantages of using peptides for this purpose are concealed in peptides' biocompatibility, chemical diversity, and ease for large scale synthesis. Our results clearly demonstrate the formation of a film by the peptides on various surfaces (glass, titanium, silicon oxide, metals etc.). We have demonstrated their antifouling activity using bacterial strains such as Escherichia coli and Pseudomonas aeruginosa and showed that the coating reduced the adsorption of bacteria to the surface.