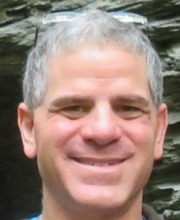 DNA is the most important biological molecule. Its double-strand recognition, as well as the ability to control its sequence and manipulate its structure open a multitude of ways to make it useful also for molecular electronics. By producing and measuring DNA-based building blocks we progress towards the construction of DNA-based programmable electronic circuits. Step by step we improve the synthesized constructs and the measurement methods of single DNA-based molecules in close collaboration with our partners.

In another research direction we use our physical approach and tools to address biological and medical challenges. We investigate DNA translocation through nanopores to develop methods for rapid DNA sequencing. We also develop ultrasensitive detection methods for biomarkers and proteins.

Conductivity through one-dimensional nanowires is a central theme in nanoelectronics. DNA and protein-nanoparticles hybrids enable good control on their structure and length and provide recognition and self-assembly but their conductivity is limited by structural factors. We investigate the morphology and electrical properties of molecules that we develop in collaboration with other groups (see below), to achieve nanowires that will have the self-assembly properties together with considerably improved conductivity. DNA and its derivatives (such as metalized DNA, G-quadruplex DNA and more) are leading candidates for application as molecular nanowires due to the double-strand recognition that allows self-assembly, the accurate synthesis of the molecule, the enormous density of information packing in DNA bases and the well established enzymatic machinery that allow to manipulate these molecules. The conductivity along single molecules is monitored by several techniques:

Scheme (left) and SEM image (right) of a dsDNA dimer trapped between nano-electrodes. 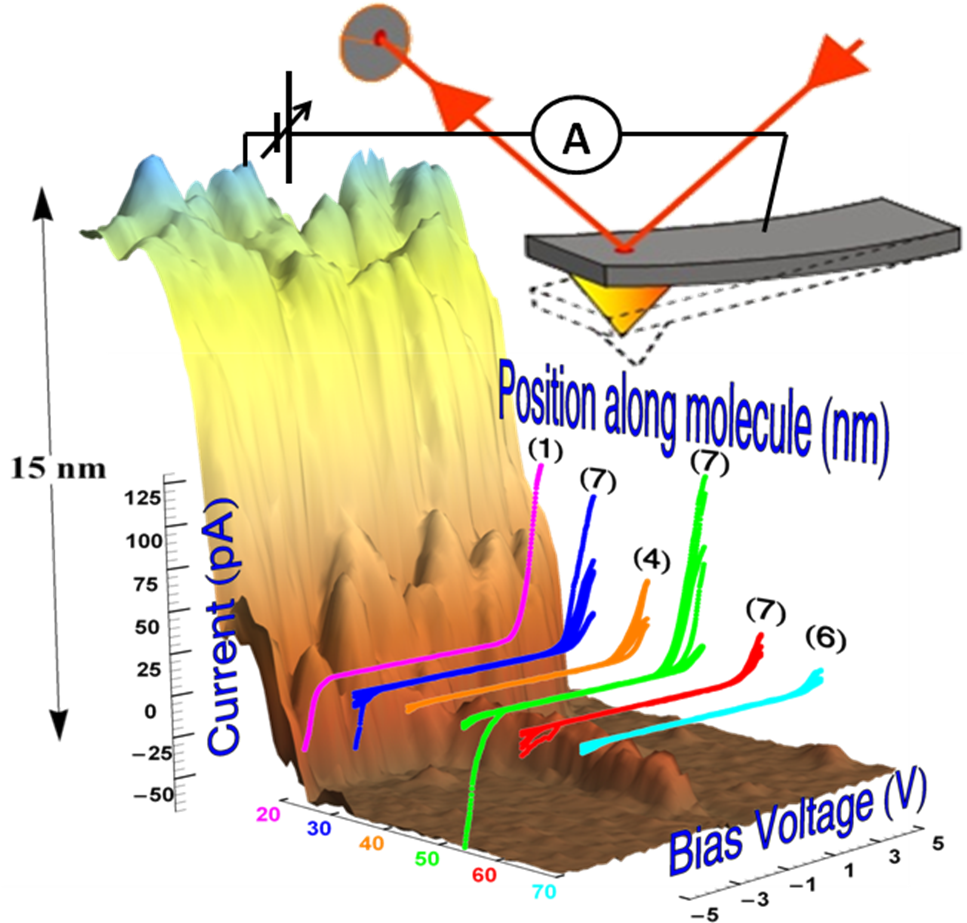 A single quadruplex DNA molecule is protruding from under a metal electrode. The molecule is contacted by conductive AFM and current-voltage characteristics are measured.

SP1 protein, hybridized with a nanoparticle, produced by the group of Prof. O. Shoseyov, is a building block for alternative structures to realize nanoelectronics applications. These structures can form ultra dense arrays for memory applications and for “lego-like” constructions of nanowires and networks, as seen in the figure below. With these building blocks we already demonstrated charging, set/reset and ternary logic operation.

SP1 images and structures: (a) TEM image (averaged) and (b) AFM image of SP1 protein. (c) SP1 array with schematic of nanoparticles that will serve for the memory. (d) A suggested nanowire and nanostructure.

We investigate translocation of DNA through nanopores. The objective is to develop methods for rapid DNA sequencing or investigating the interaction of the translocated DNA with proteins. We are using solid state nanopores that are prepared by TEM drilling in SiN membrane and in some cases this process is followed by surface modifications. In one study we made SP1 protein - solid-state hybrid nanopores that are managed to reduce the DNA translocation speed.

SP1 protein – solid-state hybrid nanopore. The SP1 ring shaped protein is decorated the entrance to a nanopore drilled in SiN membrane. The DNA is then translocate through the hybrid nanopore.

An ultrasensitive method for biomarkers detection at the single molecule level

One of the central challenges of humanity is the prediction, prevention, and early detection of diseases, cancer in particular. A possible path to meet this challenge is the development of highly sensitive methods for early detection of disease biomarkers. Biomarkers are a measurable characteristic that represents an alteration of the physiology of an individual in relation to risk factors for a disease, its progression and treatment associated outcome. We develop an ultrasensitive method for detecting biomarkers at the single molecule level using nanoparticles. Our method is based on capturing the target biomarkers with nanoparticles (that are covered with ligands that can bind the biomarkers at high specificity) and detection the nanoparticles with single molecule imaging methods such as electron microscope and nanopores. Thus it will be possible to identify and quantify the biomarker even at low abundance.

A scheme for macromolecule detection using the nanoparticle-ligand conjugates. A ligand conjugated to a nanoparticle (NP) of a specific size (capture NP) binds the target biomarker in the sample (left). The NPs are separated and concentrated. NPs of a different size (reporter NPs) are conjugated to another ligand that binds specifically to another site on the target biomarker. The binding of the biomarker forms dimers between the two NPs. The NPs are then separated again and scanned using EM (right). The NPs dimers are visualized and automatically counted.