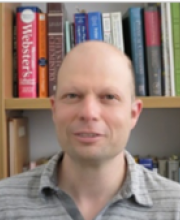 Research Focus:
We study how biologically complex solvation environments direct macromolecular association and lead to formation of complexes that can carry specific functions in cells. Examples include receptors that bind ligands or pass signals across cell membranes, and proteins that fold and unfold in solution, and can further missfold to form aggregates such as amyloid fibers. We have been following such biologically relevant molecular complexes, as well as related systems, including granular materials that sometimes behave as collections of assembling “macromolecules” governed by similar physical forces.

Specifically, we have been studying systems where not only strong and specific interactions are important, but where the presence of many weak, and often non-specific interactions are crucial, too. These include: screened electrostatics and specific-ion effects, properties of hydrogen bonding networks and their modulation by cosolvents such as osmolytes, or by entropically driven depletion forces exerted by “crowders” that act through excluded volume interactions.

The main emphasis is on developing theoretical approaches and computational tools to help dissect the different contributing forces involved in these important interactions, while maintaining close contact to experimental findings. The research group uses atomic-scale computer simulations, as well as several levels of coarse-grained methodologies based on statistical thermodynamic formulations. Where possible, we have been collaborating closely with experimentalists to test our theoretical predictions. In other studies, we have performed our own directed experiments to extend the scope of our theories.

Some current investigations include:

Modeling the impact of osmolytes and ions on protein association, folding, misfolding, and aggregation

Nature has developed many strategies to ensure that protein folding occurs in vivo with efficiency and fidelity. Among the most widely employed strategies is the use of small solute molecules called osmolytes that most often confer stability to folded proteins by preferential exclusion from macromolecular surfaces. Recent evidences indicate that modest changes in environmental conditions set by osmolytes and other cosolutes, such as salts, can have profound effects on protein and peptide conformation and aggregation. Such aggregation processes constitute a hallmark of neurodegenerative pathologies, including Alzheimer's, Huntington's, and Parkinson's diseases.

We have been examining the effect of natural osmolytes and ions on model compounds, including peptides and carbohydrate-protein channel interactions. Insights into the molecular mechanisms by which osmolytes control the macromolecular structure and thermodynamic stability were gained by performing Molecular Dynamic (MD) simulations. Experimentally, we used a range of techniques, including fluorescence, electron microscopy, and circular dichroism measurements of folding peptides, as well as single ion channel measurements.

We find that excluded osmolytes such as sugars and polyols drive peptides to favor a more compact (folded or aggregated) structure relative to more extended (unfolded) conformations. Contrary to common wisdom, we showed that this stabilization is often enthalpically driven. Using MD simulations we have been able to show that osmolytes impact water structuring in close proximity to peptide surfaces, as well as near osmolytes, thereby crucially affecting the peptide folding and aggregation processes. Understanding the role of osmolytes and ions in cellular regulation has not only allowed us to begin to predict the action of osmolytes on macromolecular interactions in stressed and crowded environments typical of cellular conditions, but will also provide insights on how osmolytes may be involved in pathologies or in their prevention.

Many proteins that peripherally adsorb on lipid membranes contain structured domains that target the protein to the bilayer, and act to restructure the membrane; examples include the C2, PH, FERM and BAR domains. Many of these domains act by specifically binding to a particular lipid species, like the PH domain that binds PIP2 lipids, or receptors that function in cholesterol rich domains. Membrane remodeling is therefore an essential part of cellular processes, and understanding the interplay between membrane elasticity and the influence of guest molecules is an important current challenge. And yet, determining material properties of lipid membranes based on composition, particularly from simulations, is a complex task. A major obstacle towards this goal is the lack of robust methodologies able to reliably quantify elastic parameters, such as the bending rigidity, KC, for membranes of different lipid compositions and in different fluidity states (i.e., thermodynamic phases). We have recently established a general computational approach to determine KC for multicomponent membranes over the entire biologically relevant range of rigidities (in different thermodynamic phases) and have illustrated its advantage over currently existing computational methodologies used to extract bending modulii from molecular simulations. Moreover, we have shown that our computational approach can extract the bending modulus, KC, for lipid membranes from relatively small-scale molecular simulations. Fluctuations in the splay of individual pairs of lipids faithfully inform on KC in multicomponent membranes over a large range of rigidities in diﬀerent thermodynamic phases. Predictions are validated by experiments even where the standard spectral analysis-based methods that have been used for almost two decades fail. The local nature of this method potentially allows its extension to calculations of KC in protein-laden membranes.