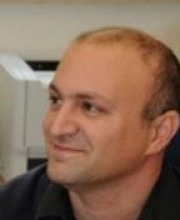 Research Focus:
Our group is interested in using peptides for the quantitative biophysical and structural analysis of protein-protein interactions (PPI) in health and disease. Based on this, we develop lead compounds that modulate PPI for therapeutic purposes. Peptides serve as major tools both for studying PPI and for modulating them (by inhibition or activation). Some examples for our research are:

2.         Development of new synthetic methods for peptide modifications. We are developing new methods for peptide synthesis and stabilization, mainly peptide cyclization. We developed a new approach for peptide cyclization during solid phase synthesis under highly acidic conditions, and applied it for improving our HIV-1 integrase inhibitors4. Our approach involves simultaneous in situ deprotection, cyclization and TFA cleavage of the peptide, which is achieved by forming an amide bond between a lysine side chain and a succinic acid linker at the peptide N-terminus. The reaction proceeds via a highly active succinimide intermediate, which was isolated and characterized. Our new methodology is applicable for the formation of macrocycles in solid phase synthesis of peptides and organic molecules. We also developed a new general N-acetylation method for solid phase synthesis5. Malonic acid is used as precursor and the reaction proceeds by in situ formation of a reactive ketene intermediate at room temperature.

3.         Intrinsically disordered proteins: About one third of the genome encodes for intrinsically disordered proteins (IDPs) or disordered regions in proteins (IDRs). These lack stable tertiary structures and are composed of a large ensemble of extended and flexible conformations interchanging dynamically. IDPs are involved in many human diseases, making them attractive targets for drug design. However, more than 90% of current drug targets are enzymes or receptors and IDPs still cannot be targeted due to the lack of specific binding pockets for small molecules. Our research focuses on how intrinsic protein disorder regulates protein activity with the ultimate goal of setting IDPs and IDRs as therapeutic targets. Some examples include: (1) the pro-apoptotic ASPP2 protein 6,7; (2) The HIV-1 Rev protein8; (3) the centrosomal STIL protein, which is upregulated in cancer9.